View from the shore

She sat on the shore, watching the waves lap at the stones as the pleasure boats toured the area with some pulling tubes and others dragging wake boarders.  The lake ebbed and flowed to reflect the activity of the wind and the boats in this wonderful play land.  Regardless of the size of the waves, it was peaceful, just as it had always been.
She heard the squeals of the young children discovering the lake for the very first time.  The sounds carrying far beyond the water were sounds of sibling bickering, competition, fun, and laughing all masking the love hidden beneath.  As the sound drifted to the cottage above, warnings that the family won't be welcomed back.  That was never the case.
She tread water, awaiting the balls that would be batted long and hard into the lake.  They would race to find the ball that had been launched with the power best mustered from the baseball bat of a nine year old.  One of them swam out to fetch the ball to swim it back to shore before they set up to receive the next one.  And the one after that. And the next - for hours at a time.  There is no clock visible from the lake.
She watched as they floated face down in the water, barely moving.  An occasional ripple or the sporadic flipper splashing behind them.  The only thing visible was the bubble butts filled with air and the snorkel tubes, slowly floating.  Two 12 year old boys, best friends, circling and circling with the fishes.  No words spoken, no words needed.
She saw clearly the reading of books in the aged teak Adirondack chairs, the skipped rocks, and floating for endless periods of time on inner tubes. It was all right there in front of her.
But it wasn't.
She sat alone for the moment.  The lake was quiet with just a few boats off in the distance.  Even the lake was different this year because of the COVID pandemic.  More quiet than normal.  Those who had come to the lake were quietly relaxing in the peace of the lake as was she.  The sights of the lake past were oh so clear even though they had happened over a twenty-five year span.  Sitting quietly now, just the adults, the sights and sounds of all of those years were as clear as when they actually happened.  The family grew up on this lake, summer after summer.  For this year, it seems that we can easily see where we have been as we find it difficult to envision where we will be, even next year at this time.  This vision of the past is clear.  This is where the family grew up - year after year.  This annual retreat helped shaped us all, and hopefully, will continue to shape us as we grow with the next generation.
She is sitting on the shore, for now, listening to the peaceful sound of the waves hitting the break-wall marveling in the lessons of the past while awaiting the memories to be created by the future and the lake.
Posted by MP McCarthy at 8:36 PM No comments:

I Have it Now

Life is cyclical.  As you age you grow more accepting of the fact that there are good years and there are bad years.  The list of bad years 2020 will join?
1974
1976
1980
1989
1994
2001
2011
2020
So, that's really not bad, given my age.  We've had a lot of good years and many more when we just sort of move along doing our thing.  The odd thing about this list of bad years?  I can tell you something really good that came of each one of these years despite the overarching pall cast upon the entire year.  That is most likely the driving force behind the human instinct to keep things moving forward.  Good does come from bad and the memories of the bad somehow fade while the good or lessons learned are almost always the things sticking with us.
What is it 2020 will bring us on the good side?  It's pretty hard to know the ultimate lessons of our generation's first pandemic, a pivotal point in race relations, and what promises to be a Presidential election for the ages.  The long-lasting positive life lessons are still in the making.
Throughout these months of social distancing, working remotely, and allowing time for true feelings, it has surprised me that my thoughts continually revert back to a few days in 2011 - another bad year.  It was Easter Sunday on our way home from church when we received the call to say my mother had been moved to a local hospital to be treated for pneumonia.  Sitting with her that day was hard.  She repeated  "someone help me" multiple times in each minute.  I was trying but there was nothing to do.
I stopped into work quickly the next morning so I would have some work to distract me as I sat with her for the day.  Half way between the office and the hospital, about a half mile drive, I heard a voice as if someone was sitting in the seat next to me.  "Don't worry.  I have her now."  It was so clear I looked to be sure there was no one there.  Of course, I saw no one.  I still re-live that any time I drive that route, remembering the exact spot I heard it.
She slept much of the second day.  She woke later in the day and was much more like herself.  We talked until she was clearly dismissing me for the day with "I'm going now."  Where?  "Into the next room."  At the time I dismissed it as her way to send me home.  She often referred to the next room and it made sense for her to move to the next room.  What I didn't realize at the time was that this was the last time I would talk to her.  Her way of relieving herself of the demands of this world, was to graciously move herself to the next room.
Driving home that night, I drove directly into one of the most beautiful sunsets I have ever experienced in my whole life.  And at that same moment, a new song came on the radio.  "Windows are Rolled Down" by Amos Lee filled my car.  It was the first time I heard the song, but it was talking directly to me.
Windows are rolled down
Sun is setting high
Windows are rolled down
I'm fixin' to die
There are many interpretations of this great song.  Everyone hears what they want to hear.  I was hearing a soulful rendition of a Danish death tradition.  When a loved one is nearing death, someone lowers the window for the soul to easily pass through once they have died.
Margaret did not wake the following day.  I left again that night for a lonely ride home - no Amos and no boost from nature.  I was very tired when I returned the next day for the vigil.  When I arrived in her room, "the sitter" was chatty and said she had a nice talk with my mother earlier.  Really?  She looked pretty much as she looked all day yesterday - asleep.  So, I asked.  "What did she say?"  The sitter went on to say she talked about all five of her children.  Okay, she had my attention.  We had a brother who died as an infant.  His picture was ever present, but if you asked my mom about her children she had four.  "What did she say about each of us?"  She nailed it.  A story that only a mother could tell.  Her hopes and dreams for each child including how so many of them had been fulfilled.  And yet, here she lay losing depth to her breaths as I watched.
Later that morning I looked up from my work and her arm was raised, reaching, about 18 inches off her bed.  Not processing what I was seeing, I rose and lowered her hand.  Why did I do that?  Why has it been so clear in the years since that she was reaching for someone, someone who had come for her?  I didn't put it all together then.  She was in the next room with the window rolled down in someone's guard to guide her home.  To guide her to the ultimate next room. She passed away within the hour.
So there it is.  The finality of human life framed by spirituality.  I didn't understand or fully process it all in real time, the bad year, 2011.  Here in 2020, I am sitting at my makeshift desk finding strength in the memories, still questioning whether I understand it all yet.  I have to trust the voice is still out there - trusting that we mustn't worry with 2020 in someone's hands and we will all be just fine. I hope I'm right.
Posted by MP McCarthy at 8:39 PM No comments:
Older Posts Home
View mobile version
Subscribe to: Posts (Atom) 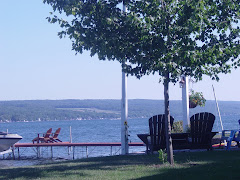